This week has been a week about remembrances.

Remembering is important because in some ways our final legacy is the memories that we leave behind us, but what are memories? Science defines them as chaotic blips of electrical energy jumping between synapses, and so are “rewritten” each time they are remembered. On a related topic, I have a recurring dream in which I come back in 500 years and am in a conversation with a scientist of the day who will be amazed that I was actually so primitive that I thought memories were stored in the brain. “My goodness,” they will say, “what a quaint concept! Simply everyone knows that memories are stored in the [            ].” Fill in the blank with something that everyone will know about in 500 years, but which we don’t even suspect now.

The dream then ends with a close up of my shocked face – similar, no doubt, to the face of a proper Elizabethan learning that the heart was not really the seat of emotions, or the face of a noble Pharoah upon hearing that the home of the human soul is not the liver.

But what does any of this have to do with Janet? This week I have been watching Janet’s brain begin the process of shutting down, with the result that memories – or at least her ability to access them – are evaporating. The CNA from hospice is seeing significant changes over just a couple days between her visits. Her speech is nearly incomprehensible at times, and she is no longer eating anything solid – think: applesauce and yogurt.

Her vitals are normal and stable, but from the way she was responding yesterday they suspected that she was in pain so they gave her .5 mg of morphine orally, and she did much better, so it looks like they may have been right. During the day, I sit with Janet so if she needs anything, I’m right there. During the night either Frannie or I check on her every couple hours.

We started that additional precaution after Janet threw up in the middle of the night this week. She apparently didn’t choke, but it is unknown so far whether she aspirated any – a very real concern given that most studies list aspiration pneumonia as the leading cause of death in Huntington’s patients (between 70% and 85%).

When she sleeps, she talks – a lot. And her waking (?) conversations contain more and more non sequiturs like the comment, “I love you… Jackie loved JFK…” – she always admired President Kennedy. But then maybe it is like my sister suggested, and the ideas were connected. Then this morning she told me that, “The doctors are wrong and I don’t really have HD, I’m just very, very tired.”

But this has also been a week for remembrances.

Despite this decline, she still had a couple moments of clarity. A couple days ago she was upset because she realized that she was not going to make it to Frannie’s birthday in November. To compensate, Frannie and I put together a quick impromptu early birthday party for Frannie so Janet could celebrate her turning 30, with family and friends. For the celebration, Frannie found a box of brownie mix (which she fixed) and we were able to do a group video chat so Janet was able to sing happy birthday to her daughter one more time.

I also noticed this week that Janet’s Bell’s Palsy has come back. The last time it was apparent was when she was pregnant with our son. In all our family pictures from that time she has her left eye taped shut because it couldn’t blink properly.

Finally, this has also been a week for blessings.

This week I was here at home when the doorbell rang, unexpectedly. When I went to the door, our visitor was Pastor Regina Wilson, of the Word Fellowship Christian Church here in Pearland. We know her because the church that she leads shares the building with the congregation that Janet, Frannie and I belong to, and because she lives two doors down from us.

When I invited her in, she explained that she had come because when she woke up that morning, God was, “…whispering your wife’s name in my ear…”. So she came to minister and pray with and for us. On a practical level, she brought a thermos of chicken broth – which Janet has enjoyed. But she also came to minister spiritually. First, she anointed Janet with oil and prayed over her.

This simple act comforted Janet greatly. Then Pastor Wilson served communion to the three of us. And finally, in an act of divine service, she washed Janet’s feet. 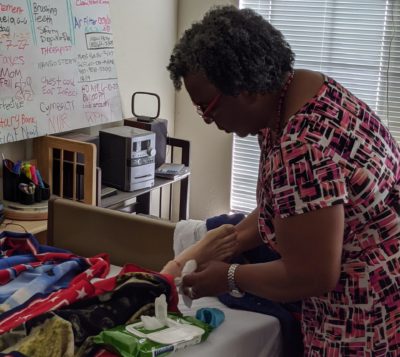 While ritual foot washing is not something we do in our church, Pastor Wilson explained that it is a regular part of their church’s worship life and they do it for each other as a part of their regular worship once a month. The act is drawn from the Gospel of John when Jesus washed the feet of his disciples to emphasize that if He serves them in this way, how much more should they be serving others around them.

Something that I haven’t mentioned before is that in addition to this blog, I have another writing project that has been ongoing for a few weeks – but it’s a very different kind of writing. Whereas this blog is (I hope!) very down to earth and practical, the story that I am writing has been since its inception almost like transcribing a dream. I didn’t know what it was to be about, how large it was going to be, or what it even meant – the words just poured out and I wrote them down.

As I added to it, and I got input from a couple of folks that I shared it with, I slowly began to see what the story means and where it is going. As it stands now, it’s over 100 pages in the word processor, and I have identified some of the major characters and themes, but I still don’t know exactly how long it will be, or how it will end – except that the last five words will be:

The End – But not really…

In any case, the reason that I am even bringing it up is that one of the epiphanies that I have had about it is that it is really covering the same territory as this blog, but in an allegorical sort of way. I realized this relationship when I came to a place in the story when one character was writing a love letter to another character. Suddenly it wasn’t two fictional characters, but Janet and I, and I was reliving our meeting and falling in love.

Last week, I wrote about the old meaning of the word respite which is “to turn around to look at” or “to regard” something. The point of this regard is to appreciate and celebrate the good, without needing to add footnotes or content advisories concerning the misery ahead. Or to put it another way, its point is to be in the moment – but in that moment. That moment before the anger started, before the doubts crept in, before the long, slow goodbye.

This week I have been remembering and reliving the good. It’s been a good week.

A prayer for when you need to remember…

“Blessed are You, Lord God, King of the Universe. It is right that I should at all times and in all circumstances bless You as the Author of all good things and fresh beginnings. But today I want to bless You especially for the beautiful memories with which You have blessed me. Rather than letting me continue viewing roses as flower bushes with thorns, teach me to appreciate them as thorn bushes that you have adorned with flowers. Amen.”