Do you remember being 18? For some of us, we really have to clear the cobwebs in our memories to go back that far! I was at college, and away from home for the first time. My home life had been very sheltered, and I could be described as naïve and innocent. My daddy had died when my twin sister and I were just 15 months old and our older sister was five. Mother was a strong Christian lady who was determined to raise her daughters in the right path. Second semester of that first year of college brought in some new students. After mutual friends introduced me to a handsome young man from Indiana, we became friends and started dating.

Don was a “life of the party” type guy, and I was much more like a wallflower. I have heard that opposites attract, and in our case it was true. During those months of dating we began to learn more about each other’s family backgrounds. I told Don about my mom’s mother dying of a brain tumor, and I learned he recently had lost both of his dad’s parents. His grandpa died of lung problems that originated during WWI from inhaling mustard gas. And within an eleven-day span, his grandma died in a different hospital from complications of something called Huntington’s Disease. When I asked him about HD, he was very vague and honestly didn’t know much about it, nor how to describe it. He just said she had been sick for a really long time. I remember thinking I would look it up in the encyclopedia next time I was in the college library.

When I did so, I found a total of just three or four sentences describing Huntington’s Disease. It was a neurological disorder. The main symptom was chorea or the so-called St. Vitus Dance. One famous person with HD was Woody Guthrie, who wrote “This Land is Your Land, This Land is My Land.” Given the paucity of information, I decided it must be some minor thing that sure didn’t deserve any worry or concern or further research on my part. We were in love, and nothing else mattered. 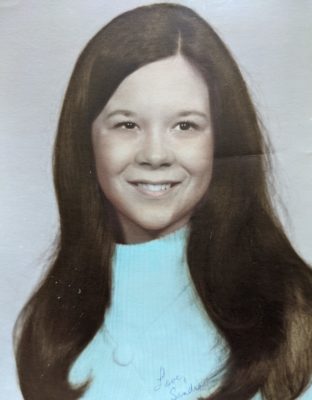 Don and I were married in August of 1972. At least a couple times a year, we drove up to Indiana from Missouri to visit Don’s family. We had one concerning, growing question when we visited his parents, and it involved his dad’s health. Something strange was going on, but we had absolutely no idea what was wrong. Shortly after my father-in-law’s parents died, he had to be hospitalized in a mental health facility for several weeks. There he was given some treatments, and different drugs were given to try to help him.

Even though Don questioned his mother about his dad’s health every time we visited, she said the doctors were just unsure of what was causing these mental, emotional, and physical problems, and not to worry about it. His dad was having problems at work over minor issues that he made into very major problems and was unable to continue working. He began stumbling and falling more. At least one wreck in the family car happened with him driving, and thankfully no one was hurt. He was going to several doctors, who each seemed to think adding another pill would “fix” him. Nothing was helping.

Eventually Don’s dad was moved to a nursing home for medical care. If anyone else had even an inkling that this could be HD, it was not shared with Don or me. It was apparently, a family secret. Even when we asked specifically if this could be the same disease that Grandma had on her death certificate, we were told his health problems were different. By mid 1987, my father-in-law was in his third nursing home.

For anyone who is familiar with HD, this can be easily understood. In one nursing home, a male aide made my father-in-law mad and he shoved this guy so hard across the room that he fell and broke his collarbone. The nursing home administrator gave my mother-in-law a short time to find another placement for him. Eventually he ended up in the Indiana State Hospital, the same hospital where his own mother died of HD. Eventually I learned he was the third generation from this family to be hospitalized for HD there.

A social worker took an interest in Don’s dad and saw one of the letters we wrote him. She contacted me to let me know how much he enjoyed the letters, and gave me a list of some things he needed or wanted, so we began sending care packages. This social worker asked me if we were educated about Huntington’s Disease. I told her we only knew my husband’s grandmother died from HD, but had really no other knowledge. She seemed very concerned and asked if she could mail me some information.

I was happy to finally be able to learn more about this disease, but was devastated when the social worker told me my husband could have the gene too. I was just stunned that it could be hereditary. Why had no one told me? Family members knew but no one ever even hinted at this information. Don knew I had begun getting more information about HD, but he responded with irritation and disinterest. We now had two precious children, and soon I realized they could be carrying the gene too.

I read and reread every article I received many times. I wrote to every author, medical center, or university listed, asking for more information. I began to gather a thick folder of articles and pamphlets and searched each one to try to convince myself that our little family would never see this horrible disease. That is one thing about these kinds of pamphlets about HD, nothing is sugar-coated. The Web and Facebook were still far in the future so absolutely everything I knew or could learn was in this published material. The materials gave the doom and gloom picture of HD because there was no current news about possible treatments or testing for the gene. Many of the pamphlets were several years old.

On January 20, 1988, my father-in-law died from complications of HD. I knew he had three brothers, all who were by now healthy, mature men. It seemed Don’s dad was the only one of the four kids who inherited the HD gene, but 25-30 years later, I finally learned the truth. There was also one daughter who had HD. No one had even told me a daughter existed. She had separated herself from her family when she became old enough to leave home, and she was never discussed. Little did I know that when my husband and I first married, this daughter lived just a few houses down the street from my in-laws. I could not wrap my mind around how some HD family members could stick their head in the sand and seem to deny anything was going on. That sure didn’t make the problem go away, nor did it strengthen my trust in those family members who kept this information quiet.

As I learned more about HD, I began consistently seeing those small “soft signs” in my husband. When I shared this with my husband’s mother privately, it was not well received. My greatest need was for someone who had been through this to tell me I wasn’t going crazy; that yes, everything I was describing was part of the beginning signs. She insisted Don did not have HD and I needed to quit thinking he did. It made my life as an HD wife so much more difficult and lonely.

Despite all the changes and challenges, I have been left with no doubt that I have a Heavenly Father who loves and cares for me. For example, I began praying several times a day, for even one HD caregiving friend. God taught me much about His care of me in the following year. I could go to Him all through the day, to share my thoughts or verbal prayers, and He was always there to listen and comfort me. Daily I thanked Him for how He would eventually answer my heart’s desire. But my need for this kind of Christian friend was overwhelming to my very heart and soul.

After praying diligently for over a year for this HD friend I needed, God gave me three within a couple weeks’ time. One was a man whose wife had HD, and one was a lady caring for her husband. The third was an HD widow, who now had two sons with HD. All three friends were precious to me, all with children who either had HD, or with children at risk of carrying the gene. Most importantly though, we could all pray together.

That was 30 years ago, but my heart is still full of thanks to the Lord for bringing these “angels” into my life. One of my special friends has passed away, but I am still in touch with her daughter-in-law and some of her grandchildren. Two of these friends are still my friends today.

This is just one example of God’s care for me. In the weeks ahead, I will share more of the story of how HD has affected my life as a caregiver. I may not need the support and encouragement I so needed 30 years ago, but I will always stay involved in the HD community, to be a friend to others on this path.

I am often reminded of the first part of the verse in Mark 7:37. “And they (the people witnessing the miracles) were astonished beyond measure, saying, ‘He has done all things well.’”

A prayer for when you need comfort and understanding…

“Blessed are You, Lord God, King of the Universe. It is right that I should at all times and in all circumstances bless You for life and breath each day. But today I want to bless You especially for Your presence that calms my worries. Help me to always remember You care deeply about every detail of my life, even when some details are unknown to me. I will trust that Your plan for my life is good, when I allow You to lead and guide me. Amen.”

7 Replies to “A Family Secret”