This week has been a time for clarity – though sometimes it has been a shrouded clarity. Confused? Well, let me explain.

For some reason, Janet has always had a special place in her heart for my daughter Catherine from a previous marriage. This concern was most commonly expressed in Janet’s desire for me to be in regular contact with her. We started with weekly phone calls, and now we often talk a couple of times a day via video calls. Consequently, my grandson, due in large part to my beard, actually believes that his grandfather is Santa Claus.

The depth of Janet’s concern for Catherine only became apparent this week. Lately, Janet’s perseveration has been being expressing itself in the form of a check list of concerns that she feels compelled to constantly re-verify to ensure that everything is organized for her end-of-life:

After these standard items, she always runs through the family (including the dogs) to make sure that we are OK. However, a couple days ago, she changed the family list by asking, “…how are the girls doing?” Wait! We only have one daughter.

“Yes, Frannie and Catherine,” she replied.

I have to admit that I was initially confused, but then I got to thinking that, viewed in a broader context, this “mistake” actually made a lot of sense. Janet has always cared about Catherine, though at times the emotional issues associated with HD got in the way of their being really close. Looking back, I think that emotionally Janet had a hard time saying what she felt, and this is how it is coming out now – clarified by Janet including her as a daughter for which she is concerned.

When a loved one with dementia says something you don’t understand, the immediate (and very human) reaction is to try to correct them. But this situation reminds me that to them, there may not be anything to correct. To them, the logic is perfectly clear and there is much that we can learn by restraining our urge to fix their perceptions, and simply hear what they are saying.

In other news, Janet’s weight continues to drop, and for the first time, she has slept for 24 hours straight – which did not help the weight issue. At the end of her long slumber, Janet seemed much better, so I guess she was just getting caught up. We have also gotten a new air mattress for the hospital bed to help with the problem of bed sores.

Janet is now going through periods where she doesn’t want anything to eat, and then suddenly will eat a lot all at once. Continuing a trend, she particularly likes anything that Frannie cooks for us, but I have to be careful to cut up whatever we are having into VERY small pieces. Janet is also asking for more personal contact like sitting and holding hands, saying “I love you” and the three of us praying together. The thing that breaks my heart, though, is that she is also apologizing more and more for being sick – like she has any control over it!

Something that I have often heard is that the one thing that never leaves is the anger. Well, for Janet at least, that is not the case – and I am very thankful.

Finally, I’m going to have to talk to the home hospice agency this coming week. Simply put, my back is giving out. I was diagnosed several years ago with sciatica and even using the proper techniques for moving and working with Janet that the CNA taught me, I still go to bed every night with an aching back.

Something that seems to be coming up a lot these days is the concept of “value.” 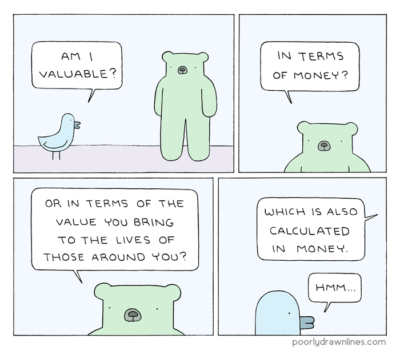 I saw this cartoon months ago and the artist graciously gave me permission to use it here. As a good four-panel cartoon should, the first three panels set us up for what we are sure will be a warm and fuzzy ending, only to have the fourth frame jerk the ethical/moral rug from beneath our feet.

In terms of its ultimate message, this cartoon reminds me of a joke I heard several years ago about two men who were stranded on your prototypical desert isle – you know the kind: small mound of sand sticking up out of the water with nothing on it but one palm tree. One man (the pragmatist) tries to explain to the other one how dire their situation is: no food, no water, not even any shelter. But as each problem is presented, the other man simply says, “Don’t worry, I make ten million dollars a year.” Finally, the pragmatist yells, “You don’t understand! We are going to die!” To which the other fellow (who it turns out is also a pragmatist) replies, “No, you don’t understand. I make ten million dollars a year and I tithe. My pastor will find me.”

But all kidding aside, what does it mean to be of value? For as long as there have been legal systems, liability laws have had to wrestle with this problem: How do you put a price tag on something that is essentially priceless? How do you compensate a widow for the loss of her husband from (for example) an industrial accident? Obviously, there is no way to make her, in the legal sense, whole. So the law got as close as it could to a just answer and invented complex procedures to calculate such things as a lifetime of lost wages, with perhaps a bit added in for “mental duress” or “loss of companionship.”

Unfortunately, over time, society has come to believe that these calculated funny numbers really are the value of a human being. As caregivers, this is a critical issue because around the world, politicians and bureaucrats are beginning to openly question whether keeping certain people alive is worth the cost to society to do so. By the way, who do you think will be the ones to not “make the cut”? Certainly, the incurably ill and those past their wage earning years. While this attitude isn’t exactly the same as the one that drove the creation of gas chambers and mass crematoriums, it is without a doubt close.

So we must ask ourselves, what if the person whose value is being questioned is my spouse, or parent – or in a few years, even me? Suddenly this question is not at all abstract or academic. We have gone beyond actuarial tables and statistics to talk about real flesh-and-blood people – you know, the ones that the politicians like to forget.

What is disheartening for me is that I can remember a time when this question wasn’t even asked because the universal assumption was that human life is of value, all the time – not just when it is useful or convenient or wanted. Now even infanticide is on the table.

The root problem, as I discussed last week, is that only people of faith have the vision needed to see the interconnectedness that demonstrates the value of all human life. Without a perspective larger than ourselves, there is no basis for assigning worth or value to human life, and the resulting philosophy will be based largely on personal greed or authoritarianism.

Next, before closing, the passing of Justice Ginsburg has resulted in a flurry of breathless posts trying to shame people for saying things such as “Rest in Peace” or “She’s in a better place now.” Their point is that since she was Jewish, we shouldn’t be “polluting” her memory with such Christian concepts. The problem is that neither of these ideas are exclusively – or even originally – Christian. While it is true that Christians believe in (and in fact, are counting on) both of these ideas, they were also exceedingly common among the early founders of the faith who were predominantly Jewish, as well as modern day Judaism.

Finally, I know that post is relatively short, but this is a strange time in our household. I have spent many hours in tears and caring for Janet and Frannie.

A prayer for when you are exhausted and hurting…

“Blessed are You, Lord God, King of the Universe. It is right that I should at all times and in all circumstances bless You for the everyday strength that you give. But today I want to bless You especially for the special strength and reassurance you provide to care for us in times of extraordinary trials. Thank you for the knowledge that darkness is always the precursor to light. Amen.”