My husband was in his fourth year of needing full time care in a nursing home due to Huntington’s Disease, when he suddenly began to repeatedly try to run away from the facility to go back home. We lived 20 miles away, and at this time, he could hardly take a step without falling. To make matters worse, he began to get aggressive with anyone who got in his way. One day I got a call at work from the Director of the nursing home, telling me they had had an “incident” with Don, and they had had to call the police to restrain him. He was OK, but he had been transported to a local hospital until they could decide what to do with him. He had shoved a little elderly lady when he was trying to make a run for the door to get outside. The little lady had no injuries, but was understandably traumatized. The police were involved in case charges were filed against him.

When I got to the hospital, Don was in a cheery mood. He had no memory of what had happened and was actually loving all the attention he was getting in the hospital. He was put in the ICU so he could be monitored all night. The next morning, two police officers came to take Don to a psychiatric hospital where they could do an evaluation of all his medications.

My heart broke when I saw them place Don in the back seat of their squad car and speed off. I needed to tell Don one more time that he would be OK, that I would check on him daily, and that I loved him. Little did I know that I would be unable to even see or visit him for seven days. Then I could only visit for 30 minutes, twice a week. It was a scary place to visit. I looked around at all the men in his visiting area, and some were huge burly men who seemed to pick a fight with anyone around. Thankfully, Don kept to himself.

I was so afraid for his safety. Fear became my constant companion. Would he be safe? Would his medicines be regulated so others would feel safe around him? When these sorts of things happen to other people, there can be added worries about family finances. They might lose their home. They may have to go down to one car. And then there is medical care.

After I became a caregiver, a whole new set of fears arose. I was not sure I could even give Don good healthcare. I worried about whether I was physically, emotionally, and spiritually prepared to literally give my life to caring for another person. I was uncertain about how long this journey would last or how bad it would get. When I am cooped up in the house 24/7 and can rarely have a meal out with friends, will I even have a social life?

I worried about our two children during these years. How would this all affect them? Both were smart and made good grades in school, and both had close friends. Would they be comfortable inviting friends over… or would I be comfortable with them inviting friends over? We never knew what Don’s mood of the day might be. And, if one of the kids stumbled, or dropped a dish, or forgot something, I prayed it wasn’t an early sign. Only parents of at-risk children can understand what this truly means. This brought me huge fears as I never wanted to see my own flesh and blood have to live their life with HD.

In the end, at the psychiatric hospital, all Don’s medicines were stopped and slowly a few were added back, with a few new ones. He was now very calm and compliant and after six or eight weeks, he was cleared to go back to the nursing home. However, the Director had decided he would not be allowed to move back. Every nursing home I talked with gave me the same answer. No. They were not able to care for HD patients. Eventually, after meeting with the Director at our original nursing home, she agreed to allow him to come back on a trial basis. It was a calm, sweet patient who returned, and there were no more behavior problems.

There are very real fears and uncertainties that patients with degenerative neurological conditions and their caregivers might experience – even before they know anything is definitely wrong. These diseases have so many possible early signs and symptoms that anger episodes can seem as though the person is just having a really bad day and overreacting. Often, the explosive person forgets it as soon as they calm down and cannot understand why the caregiver can’t just let it go.

I remember being hurt by things said or done by my husband, and it was always up to me to forgive and forget. He saw no problem with his actions and it was just easier for me to be the one to try to make things right. It was happening frequently and I became understandably fearful that this was the new normal.

The best thing I could do at those times was to get alone and tell God about it. He knows the situation, but I can pray to ask for His help for my fears and heartaches because I am His child. He loves to hear from His children and longs for them to talk to Him every day. In Philippians 4:6-7, God tells us not to worry about anything, but to come to Him and let Him know our needs. He gives us a great peace in our hearts and minds. He understands and comforts us! And He is waiting to hear from you, too.

Certainly when I am unsure of what my future might hold, fear often grows as my faith is challenged. Perhaps we see our loved one with health problems but have no idea yet what might be the cause. Every visit to a doctor makes you wonder if it might be the appointment when you get a diagnosis.

Other areas that brought me fear were parts of caregiving that only grew more difficult. My husband had the diagnosis by now and we knew HD could stretch on for years. I wondered which symptom would show up next. How long would he be able to work? When would he decide to make small repairs needed around the house? Every time he drove the car, I was terrified he would have a wreck. His braking response was slow, and his speed control was very erratic with an uneven pressure on the accelerator. But I knew that, for him, giving up driving would not be an easy transition.

Fear is a very normal human response and we learn to express it at an early age. A baby cries in fear when someone else is caring for them and they want their mommy. Kindergarten students are often scared and fearful on those first few days in a classroom setting. As a school age child, I never would go to sleep with one leg out of the covers and my foot dangling off the bed. I had a fear that a tiger or bear would surely take a bite out of my toes. 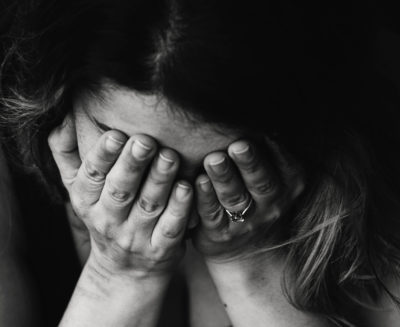 As a caregiver or friend to those with health problems or who are grieving, I should be ever mindful of the trap that fear places us in. It can stop us in our tracks and the burden of our daily life becomes almost unbearable. I can truly grow in this experience when I allow our Heavenly Father to lead and guide me.

I had to go to the Lord all through each day, to ask for peace in my heart and mind. All through the day I would think of the verse in Psalms 34:4: “I sought the Lord, and he heard me, and delivered me from all my fears.” All through the day his presence helped me put away those fearful thoughts.

A prayer for when you are feeling fear of the future…

“Blessed are You, Lord God, King of the Universe. It is right that I should at all times and in all circumstances bless You for how You love and protect Your children. But today I want to bless you especially for how you are with me every single moment of every day. You know when I am feeling depressed, overwhelmed with duties in life that seem to never end, scared of what the future holds and full of fear. Help me to turn my thoughts toward You when I am weak. Teach me to remember to depend not upon my own abilities, but upon Your strength. Amen.”

One Reply to “Fear of the Future”