I got this title as a (perhaps inadvertent) gift from my sister in Indiana. Which is what the Porters are knee deep in right now: prolonged expectations – and not a little associated agony. As I posted on my Facebook timeline, Frannie and I have started a new policy in terms of caring for Janet where one of us is with her 24/7. During the day, I sit next to her, while Frannie handles the “night shift.”

So Frannie doesn’t have to sit up all night, we have an old mattress that we put on the floor next to Janet’s bed. That way she can sleep when needed. She also sets a timer so that even if she sleeps, she wakes up once an hour to check on her mom. This morning about 2:00 when Frannie woke up to check on her, Janet had somehow managed to pull her pillow out from under her head and the pillow was over her face! Janet is okay, but it scared both of us.

In other news, when the nurse came this week, he determined that Janet was not making enough urine to justify the catheter, so he removed it. In addition, he began to suspect a UTI (perhaps caused by the catheter) so he recommended an antibiotic. This event had a couple of interesting side impacts. To begin with, it became clear that Janet heard and remembered the conversation that I had with the nurse.

In addition, while she is continuing to have a lot of trouble stringing thoughts together and speaking, she certainly understands much of what she hears. For example, when the medicine that the nurse recommended did not arrive on schedule she got very agitated, repeatedly asking the time and asking for her medicine. When we eventually got the medicine, she quickly calmed down and slept. Since starting the antibiotics, she has also drunk more water.

As it turns out, this reaction to the medicine is another potential indication of a UTI. Often people with dementia lose the language skills to express physical discomfort verbally so it comes out as irritation, aggression, or agitation. Consequently, when the medications started soothing the UTI, Janet became more calm and relaxed.

Finally, we got our Christmas decorations up this week. While there is no danger of our home being seen from space, we like the little potted pine that I bought at the store. 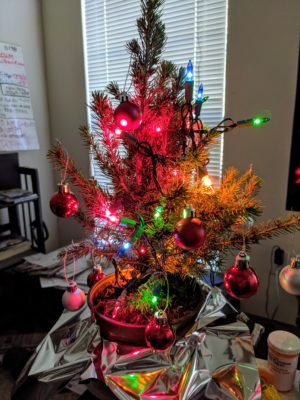 It’s not very big, but it is placed and decorated with love. Janet can see it from her bed, and that is enough…

In addition to this blog, I am writing other things. For instance, I am currently working on the editing of a metaphorical fantasy book that I have written, titled simply The Journey. While doing that kind of work I like to listen to music on YouTube. In the comments section on one of the videos, I spied a comment by a young kid (maybe 18) who was talking about being depressed, alone and lacking motivation. The poster was also complaining about catching a lot of “bad breaks” and couldn’t wait to “get on with life.” At that age I know that I wanted – and expected – things to happen fast. The paradox, of course, was that life is already moving very very fast, but at 18 it feels like it is creeping by.

Still, there seemed to be a common thread between my book and the journey he was on, so I decided to reply. The post that the kid left was already 30 days old, so I started by referencing that…

I hope that things are going better for you now than they were a month ago. But looking back from a perspective of having seen 67 summers come and go, there’s a couple things that I want to say.
First, there is no such thing as an accident, random chance, or luck. Those are all concepts thought up by people who figured that they need someone or something to blame for misfortune. The truth is that you don’t need a scapegoat to blame because misfortune is itself a myth. Everything has a reason.

Second, being alone can be a terrible thing. I know because after 35 years of marriage to a woman I would do anything for, at some point in the next month or so, I know that I will be alone again because the woman I love will die from a condition called Huntington’s Disease. However, through my wife’s and my journey together I have learned that I am never really alone – even when the bed next to me is empty. Eyes are too easily fooled.

Third, it’s good that you have big plans, but big plans need big reasons to exist – bigger reasons than you. You want to be fabulously successful in business? Great, but you need a reason bigger than your own comfort or self-gratification. You want to be a great artist? Wonderful, but your art needs to have a purpose beyond having an impressive retail value.

My comment has gotten a couple positive responses, but I have no way of knowing whether the original poster has seen it – he or she hasn’t responded.

I wanted to mention this post here because those points are critical for caregivers. Messages espousing self-centeredness are becoming increasingly common – even among those who frequent the support forums. I would be remiss if I failed to point out that this trend counters millenia of Judeo-Christian teaching and practice. For example, consider the Ten Commandments. While there are certainly repercussions when I violate any of them, ask yourself: who is most directly impacted by the transgression of most of these rules, you or the one being lied to (or about), murdered, robbed or sexually betrayed?

The point is that in this mad rush towards a worldview that puts us (individually) in the center of the cosmos, we are abandoning the very things that made our world what it is today.

Another disturbing trend that has at least the potential of impacting caregivers is that I have begun to see exposé articles online decrying the number of unskilled, unprofessional people (that’s us, in case you were wondering) who are caring for ill and infirm family members. The articles then go on to wonder aloud how the government allows (!) this to continue. One article even likened it to practicing medicine without a license. Their “solution” is to force or coerce the aged and ill into moving into government controlled facilities – just the sort of places that government officials turned into death houses during the recent pandemic.

But above all, we must resist surrendering to the fear that characterizes so much of society. Remember that fear is the deadliest virus because it not only steals your future, but your present as well. Moreover, it has this deathly impact whether the thing feared appears or not. What is more, it matters not whether you are fearing a pandemic or autocratic politicians, because neither in the end have any control over what ultimately happens to you.

To attribute the power of life and death to germs and politicians is the basest form of idolatry. So I guess the real lesson is that when the resolution of a situation is delayed, don’t go looking for an alternative solution. The best answer is coming and it is always worth waiting for.

A prayer for when you grow weary of waiting…

“Blessed are You, Lord God, King of the Universe. It is right that I should at all times and in all circumstances bless You for the ways in which You hold the world together, from the mightiest star system to the tiniest particle of dust. But today I want to bless You especially for the perfection of Your timing. I often feel like something is taking far too long, or conversely, that it flies by without time to even appreciate its passing. Nevertheless, thank You for always having what I need when I need it. Amen.”

2 Replies to “The Agony of Prolonged Expectations”