Even as Janet has continued to fade physically this week – the CNA reports that the difference is visible from one day to the next – Janet is somehow more aware of what is going on around her. For example, one day after lunch I burped rather loudly, and I automatically said, “Excuse me.” Janet immediately replied, “You’re excused.” A small thing, I know, but it is something.

She has also decided that she doesn’t like yogurt and ice cream anymore. So we tried her on baby food. This change has really worked out well, though she insists on being fed by Frannie. Gerber makes small containers of various types including chicken and rice, chicken noodle, pasta primavera and (one of Janet’s new favorites) butternut squash. But these prepared foods have two problems.

First, they are very thin. However, that was fixed using an old trick that I remembered from when our kids were babies. The problem for the babies was that as they were being weaned off of Janet’s breast milk, we had trouble keeping their precious little tummies full. Baby foods, like what we are giving Janet now, were more substantial than milk, but they (especially our son) wanted more. The solution was that several manufacturers also made a flaked rice cereal that was intended to be mixed with water or milk. Mixing it with the baby food, essentially as a thickener, gave a bit of improved nutrition as well. The kids did well on it then, and Janet likes it now.

The second problem with the prepared baby food is that in response to parents’ complaints, the manufacturers stopped adding salt to them. This is good for babies, but often results in the food tasting not unlike wallpaper paste – and bland wallpaper paste at that! So we added a very little salt and the flavors improved significantly. While on the topic of seasoning, we discovered that Janet loves it when we add a pinch of cinnamon to her butternut squash.

Still, she is getting more confused. Today she’s been saying that she is on a “conveyor belt” and is worried that she has “lost her belongings.” I have no idea what that means, but we are trying to reassure her.

Also this week, a cousin of Janet’s sent us a picture of her. The year was 1955 and Janet was serving as flower girl in a family wedding. 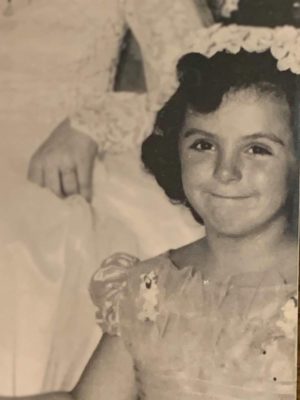 I love the smile – how very, very Janet. One day soon she will have that smile back in all its mischievous wonder.

In years past, there was a common saying that went, “Tend to your own knitting.” It meant that the person being addressed should mind their own business. Well, this week, I have been tending to my knitting, but in the literal sense. I knit. I don’t knit a lot, and I’m probably not very good at it, but should the need arise, I can still run off a couple of scarfs or a stocking cap. The most complex thing I ever tried was to make a pair of socks. Unfortunately, I used the wrong kind of yarn and they came out so thick they were more like my old Air Force arctic boot liners – they could literally stand up by themselves.

But while I hope that you are amused by the story about the socks, you shouldn’t be surprised by the idea of a man knitting. If you go back to many of the countries where knitting developed, it was traditionally the men who knitted. The craft was thought to have developed as an offshoot of making and repairing fishing nets. Plus, it was part of the division of labor: women spun the wool into yarn, and then the men made things from the yarn his wife created. It was only later that it was hijacked by Victorian matrons to be used as a signal for words that weren’t allowed to be uttered in movies. For example, you couldn’t use the word “pregnant” but showing a woman knitting a pair of tiny booties got the point across just as well.

The neat thing about knitting, from the standpoint of a caregiver, is that it is easy, portable, and relaxing – even meditative. Oh, and don’t forget cheap too. You don’t need a lot of expensive equipment, and the supplies don’t cost a lot, unless you want some kind of fancy yarn. A pair of needles (#8 in the US will do nicely), a skein of yarn, and instructions from the internet, and you are on your way to your first scarf. Scarfs are easy because you just knit back and forth until you run out of yarn and then you’re done. Or if you want, you can tie on another skein of yarn and keep going – it’s all up to you. The project that I am working on right now is the creation of two scarfs for Christmas presents.

There is something about the process of knitting that is extremely salutary to one’s mental state. All you have to do is repeat the same two stitches over and over again, and in the end you get a beautiful scarf. Oh, it might not be as fancy as one you buy in a story but it will be yours.

Earlier I said that knitting is meditative – and it is. The soft tapping of the needles and the still softer whooshing sound they make as they slide and rub against each other creates a wonderfully restful tap-whoosh-whoosh cadence, and as the fabric you are creating accumulates, you get a tremendous sense of accomplishment.

However, if you pay attention, there are some very important life lessons that you can learn from knitting. For example, a single stitch accomplishes little, just as a single act usually has little impact on the world. However, when you combine that single stitch with hundreds or thousands of similarly “unimportant” stitches, a beautiful fabric appears. Likewise, when you take a single act and combine it with hundreds or thousands of others you create a loving, supportive environment for the person under your care.

One of the things that makes knitwear interesting, and beautiful, is the patterns in it. These patterns can take the form of changes in colors or the ways the yarn twists and winds around itself in a fancy cabled sweater. But there’s a secret: In a sense, it’s all an optical illusion. The “pattern” results from how a single stitch relates to the stitches on either side of it, and how a row of stitches relates to the rows above and below it. To a single stitch, or even a row of stitches, there is no pattern – in fact at that level, all the stitches may appear identical and thoroughly unremarkable.

But to the creator, the one doing the knitting of the yarn, there is a pattern. But that pattern isn’t formed by the cleverness of a particular stitch or one row’s brilliant colors. In fact, those sorts of things will often ruin a pattern because they draw attention away from the creator’s intention for the pattern. A truly beautiful pattern only exists in the relationships between the various parts.

As a caregiver, it is easy to feel that the individual stitches of our lives don’t matter very much. For example, will the world come to an end if my loved one’s food is a bit bland? Probably not. In fact, your loved one might not even notice. But that does not mean that the act was pointless or the concern that drove it was futile. It is noticed and it forms a vital piece of the pattern for the world.

We are told of innumerable small, even trivial things that are important to The Creator knitting our world together: sparrows dying, cups of water, tiny coins. We also read that they are all important because they all play a part, sometimes in the causal sense as in this famous 13th century proverb:

But sometimes a small thing is important because, in the grand scheme of things, there is significance in the insignificant because everything came from the hand of the same Creator. In this view, there are no “throw-aways.” No throw-away acts, no throw-away words and certainly no throw-away people.

A prayer for when you are feeling small…

“Blessed are You, Lord God, King of the Universe. It is right that I should at all times and in all circumstances bless You for Your magnificence and splendor. But today I want to bless You especially for the meaning with which You imbue my life. Because I am working empowered by You, nothing I do is trivial or meaningless. Moreover, I know that even though I do my work imperfectly, Your grace will fill for my in any shortcomings. Amen.”

4 Replies to “Tending to my Knitting”