Okay, it happened this week. The other night Janet looked up and asked me what my name was. She knew I was her husband, but she couldn’t remember my name. Then the next morning, she could remember my name, but not Frannie’s.

However, the main topic this week is gifts. This week (Christmas Day, in fact) we were blessed with another visit from Pastor Wilson, whom I’ve mentioned before in a previous post. She was in the neighborhood having Christmas Dinner with a member of her congregation and she stopped by afterwards to look in on us. During this visit, Janet was able to confide in her that she was afraid to die because she worried about Frannie and me. Pastor Wilson said that Janet has the heart of a mother and the heart of a wife. We were able to reassure her that we will be fine, and that we have friends who will help take care of us.

Yesterday (Saturday), our son, his wife and their three daughters came to visit. Shortly after the first of the year, they will be moving to Germany for an 18- to 36-month duty assignment. So this will be the last chance for them to see her alive and say goodbye. Everyone took advantage of the opportunity. When they arrived, our son immediately went to his mom and said, “Hello.” She, in turn, responded with, “Where are the girls?” The granddaughters all took turns talking to their grandmother. Mikaela, the one on the left below, wanted to paint grandma’s nails with a glittery green polish, but the chorea made that task impossible. 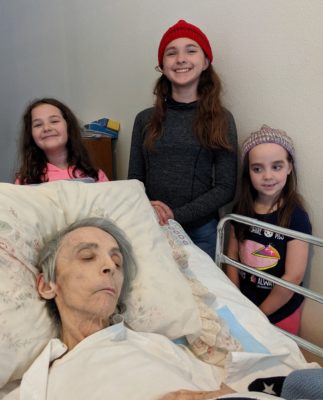 We had a chance to sit and talk for three hours, and then they needed to be heading out – besides Janet was getting very tired. As they were leaving, each of the girls gave their grandma a final hug and a kiss, and our son took several seconds whispering something in Janet’s ear. I couldn’t hear what he was saying, but she nodded several times.

Finally, she looked up at me and said it was good to see the girls again, and I nodded in agreement. She next asked if I enjoyed seeing them, and I said that I enjoyed it very much. Then she looked me straight in the eye and said, “Merry Christmas.”

And here I thought I was giving her a Christmas present…

The name of this post is drawn from the title of a famous short story by O. Henry, pseudonym for the American author William Porter. I enjoyed reading his works for two reasons. The first was his name. He was the first person of note that I became aware of with the same last name as mine. Moreover, my father’s name was William. The second was because his stories were so good and often had a humorous twist. For example, he is also famous for his story The Ransom of Red Chief in which some hapless swindlers decide to make a quick buck by kidnapping the son of a wealthy man. The only problem is the parents don’t want the young hellion returned. In the end, the kidnappers have to pay the parents to accept the kid back.

Perhaps because he was known for humor such as this, people often misinterpret the ending of The Gift of the Magi as humorous as well. But I have always felt that it goes much deeper. To recap, the story is set the early 1900s and the day before Christmas a young wife realizes that she only has $1.87 to spend on a present for her husband, so in desperation she goes to a local shop and sells her beautiful long brown hair for $20. Then with the proceeds in hand, she hurries off to buy a gift for her beloved. What she gets is a beautiful chain for the heirloom watch that her husband had inherited from his father.

When her husband returns home that evening, he initially expresses dismay over her hair being cut so short. Because she is worried that he is angry (he had always loved her long hair), she presents him with the fine chain for his watch. In response, he embraces her and reassures her that he doesn’t love her any less for having short hair. Then he pulls a package out of his pocket and throws it on the table. When she opens it she discovers a set of beautiful ornate combs that he had bought her to hold her long hair in place. Then he confesses that to get them he had to sell his prized watch.

Many readers, however, stop right there and with an ironic laugh move on, failing to really read the last paragraph of the story:

“The magi, as you know, were wise men—wonderfully wise men—who brought gifts to the newborn Christ-child. They were the first to give Christmas gifts. Being wise, their gifts were doubtless wise ones. And here I have told you the story of two children who were not wise. Each sold the most valuable thing he owned in order to buy a gift for the other. But let me speak a last word to the wise of these days: Of all who give gifts, these two were the most wise. Of all who give and receive gifts, such as they are the most wise. Everywhere they are the wise ones. They are the magi.”

That is the real point of the story, and for that matter of our lives – and especially so if we are caregivers. We often sacrifice, without thinking, the most precious things we have to care for our loved ones. And for that we are, unfortunately, sometimes called fools. It can be tempting to attribute that judgment to the sad times in which we live. However, we are not the first to be called fools for loving and caring for others, and we certainly won’t be the last.

Almost 2000 years before O. Henry wrote his story, someone who was very wise indeed wrote this in a letter to a group of his friends: “…the foolishness of God is wiser than men.” I have heard many who interpret this statement to be about how much bigger and more majestic God is than humankind. And while that is certainly true, I don’t believe that is what this statement is about. Rather it’s a statement about what truly constitutes wisdom.

We see the message every day: “Don’t be a fool! Look out for yourself, nobody else will.” However, that message is the real foolishness. Everyone dies, the wise and the fool alike. The difference is that when magi die, they leave behind them a world that is a bit better than the world they entered. So if the world seems to be “going to heck in a hand-basket,” perhaps the problem isn’t an excess of fools, but a dearth of magi.

A prayer for when you are feeling foolish…

“Blessed are You, Lord God, King of the Universe. It is right that I should at all times and in all circumstances bless You for Your wise counsel and direction. But today I want to bless You especially for opening my eyes to the truth that the giving and sacrifice You modeled for us two millennia ago is still the wisest course of action. Please, touch me and teach me so that I might be able to present truly wise gifts. Amen.”