There’s a lot of good news this week. Janet is sleeping and eating better and I think we may have gotten past the hurdle of Janet deliberately doing things that she knows are wrong.

First, the hospital bed that I mentioned last week is working wonderfully! She is, understandably, resting much better. Second, we have lowered the thermostat for the air conditioning from the normal 84° to a more moderate 79°, thus making the apartment more comfortable generally.

These two changes are, in turn, interrelated. It turns out that Janet’s resistance to a hospital bed had nothing to do with her sleeping “just fine” on the sofa. Likewise, she wasn’t “getting cold” if the thermostat was set below 84°. In both cases, the real problem was money. She was afraid that we couldn’t afford a new bed for her, or more air conditioning because at my old job, there were a few months when things were pretty tight. However, I have been at my new job for over a year and a half.

The way that the money issue came to light was through the ministrations of the visiting Certified Nursing Assistant (CNA) from the home hospice organization. When she came for her visit Friday, she had a long conversation with Janet that ended with Jan admitting the truth as to why she was resistant about hospital beds, air conditioning, using her walker (she was afraid that I had spent too much on that too). As icing on the cake, the CNA also got her to admit what I had long expected, that she was resistant to following instructions because she had been independent her whole life and was afraid of becoming dependent upon others.

I’m not sure how I feel about those revelations: Happy, irritated, relieved, upset – all the above and a few more besides? The feelings are definitely mixed. Things are better – which is a positive, but I feel irritated and sad that she put herself through this added stress and didn’t even mention it…

An unfortunate aspect of HD and most other diseases causing dementia, is that anger and aggression are very common. On the support forums, these symptoms are depressingly common. It matters little what the underlying condition might be, where you find dementia, you find problems with violent behavior. Often the amateur family caregivers get stuck dealing with it because the professionals (nursing homes, memory care facilities, etc.) simply refuse to be involved. I have been told by nursing home administrators that they don’t accept Huntington’s patients because they are, “…too violent.”

Similarly, my mother who suffered from dementia as the result of two strokes was nearly evicted from a local nursing home for being too aggressive verbally. Really? She was a 84-year-old woman who couldn’t get out of bed by herself, and your staff was concerned for their welfare? Give me a break.

Still, it is an issue that is out there so I decided to look into it and found an amazing amount of potentially useful information. In fact, there was so much good information that rather than trim it down and possibly leave out something important, I decided to cover it in two parts. This post discusses aggression, some of the non-obvious concerns, and how common it actually is. Next week we’ll talk about causes and coping techniques.

Please note that while some of the following sources are HD-specific, similar research exists for all sources of degenerative dementia. In any case, the basic principles are the same.
I’ll start with a 2014 paper by C.A. Fisher, et al, Aggression in Huntington’s Disease: A Systematic Review of Rates of Aggression and Treatment Methods. Published in the January 2014 issue of the Journal of Huntington’s disease, this article summarized the contents of 23 research papers, published around the world, and came up with some stark results. For example, it concluded that:

So how common is it exactly? In the research that they covered, the incidence of aggression ranged between 22% and 65%. An interesting point the authors made to explain this wide range was that studies involving patients that had only recently been diagnosed tended to have the lower numbers while the high end of the range came from patient populations that had been diagnosed 10 years or more previous – or to put it another way, the longer the patient survives, the greater the chance that they will exhibit significant aggression.

By the way, this observation correlates nicely with one generic dementia study I found that pegged the incidence of aggression in the end stages of the disease at greater than 80%.

I’m glad to see that they included “inanimate object” in their definition. Why? Well, Janet and I used to have an album of wedding pictures – but no more.

Over the years, Janet and I have participated in several such evaluations. A big problem with these tools, however, is that they were typically administered while both Janet and I were present. Consequently, there were times when I was left with the choice to either:

In the end, I did a bit of both. It would be nice if doctors, and especially medical students doing a neurology rotation, understood that asking a question like, “Has your spouse ever been physically violent?”, while the spouse is sitting there is not a good thing… 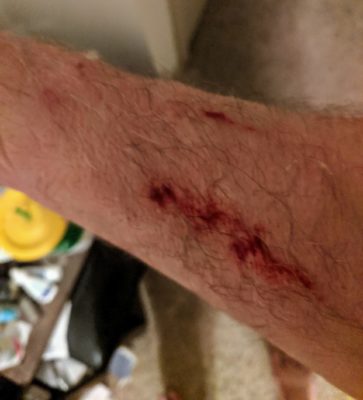 As with most things in life, forewarned is forearmed. The first thing, therefore, is to make sure that you are squared away between the ears by setting your expectations appropriately. To be clear, our goal is to prepare for the worst case scenario, but pray for the best case scenario (in which many of the preparations we make will never be needed). If this sounds like we are getting ready to go to war, well guess what… we are.

One of the blessings – and one of the dangers – is that the aggression doesn’t happen all at once. Like that proverbial story about the frog in a pot of water, the “heat” sneaks up on you. They don’t just wake up one morning as a violent tyrant. Or if they do, it probably isn’t due to dementia, and is therefore treatable. Dementia-related aggression starts slowly, with an illogical argument that isn’t particularly intense, and proceeds step by step from there. This progression means you have time to adjust and learn. But it also means that you can miss what is happening.

To be honest though, other times it’s a matter of willful ignorance. To avoid having to face either the unpleasant truth that a disease can be this horrific, or their own responsibility to take action, family members will sometimes jump to the conclusion that you must obviously be doing something to “provoke” the person. To make matters worse, even you can fall into the trap of thinking that everything must be at least partially your fault because, you reason, nobody in their right mind would act like that unless they were being provoked. But therein lies the rub: they aren’t in their right mind.

A prayer for when you are stumbling along…

7 Replies to “Dealing with Aggression:How Big is the Problem?”