Janet got back from her hospice respite time well-rested and well-cared-for, even if a bit confused. She didn’t understand who was picking her up, or where they were taking her. One thought was that they were picking her up to drive her to Heaven. But then she became convinced that she had been “kidnapped” by some shady operators from a political campaign, but she had forced them to bring her home instead.

While it might be tempting to snicker at or worry about these sorts of expressions, they actually show that her brain is still processing information and trying to do what human brains do best: make sense of the world – even when large chunks of information are missing or distorted.

Another example of the wonder of human consciousness is memory, and everyone knows that dementia means to forget. Nevertheless, there are exceptions. For some unknown reason, while the ability to retain short-term memory in general gradually disappears, something will occasionally “stick” and be retained.

A couple weeks ago when Janet was trying to figure out the logistics of how she was going to get to heaven, she asked me what dying would be like. In response, I told her it would be like drifting off to sleep, but when she woke up she would be looking into the face of Jesus. While that answered her question and put her mind at ease, it did create another issue: disappointment.

Every morning now, Janet opens her eyes, expecting to see Jesus, but instead beholds only me. Being understandably disappointed, she asks the one simple question that has been this week’s focus: “Why am I still here?”

Before continuing, I also want to acknowledge the CNA that the home hospice agency we are working with has assigned us. Latonya is a wonder, always kind and professional, but also playful and friendly. For example, this week she brought Janet some flowers to help cheer her up. 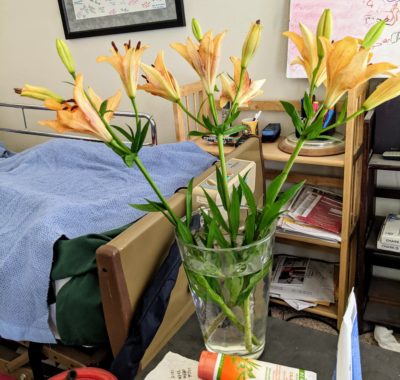 One of the most common faith-based themes deals with the idea of waiting on God. However, in English, at least, the phrase “waiting on” can carry several different meanings. For example, in some usages it is a synonym for “serving,” as in: “I will be just a moment, I am waiting on another customer.” Occasionally this concept is used in a religious context to describe service to and for God. Interestingly, when considering the teachings of Jesus, the distinction between providing service to God and providing service for God, can get very fuzzy, especially when you consider the degree to which God identifies with the weak and powerless – as when he tells us, “As you have done to the least of these, so you do to me.”

Next, there is the idea of waiting on someone to provide an answer, such as God answering a prayer. We are often advised to pray and then wait on God to provide an answer. As an aside, we are told that God answers prayers by saying, “Yes,” “No,” or “Not now.” However, I have learned that other variations are possible, such as, “Yes, but…” Those are the tricky situations because like Cinderella we tend to hear the, “Yes you can go to the ball,” but miss the admonition or condition that follows.

Then finally, there is the sense in which Janet and our family are “waiting on” God. This type of waiting on isn’t primarily about service – though for those of us around Janet, there is that component. Likewise, we aren’t really waiting for a decision, because all the decisions to be made have been made. Rather, it feels like our task is simply waiting for the right time. But why is that waiting needed?

Well, in a world where we are alone and nothing we do or say impacts anyone else, there would be no need for this type of waiting. However, as you are no doubt aware, that is not the world we live in. Rather, we live in a world of unimaginable complexity. In the secular realm, this complexity is why governmental centralized planning has never worked well, regardless of how many times it has been tried, and it is why the phrase “unintended consequences” is now a standard part of the modern political lexicon.

An interesting movie that played with this idea of interconnectedness and the importance of timing, was a 1998 German film named Lola rennt, or for its English release Run, Lola, Run. The plot is really pretty simple: Lola gets a panicked phone call from her boyfriend Manni, who has just lost a bag full of money that belongs to the mob. If Lola can’t replace it in 20 minutes he will probably be killed. Because she has no car, she has to run across town (in this case, Berlin) and come up with a scheme for obtaining the money.

In a series of real-life instant replays, Lola tries three separate times using different ploys to get the money and obtained from the first two attempts different (unpleasant) results. On the third try, she finally gets the money, only to discover that it wasn’t really needed after all. However, for me, the most interesting part was how along the way she encounters the same people over and over again. Although the timing of their encounters varies by no more than a few seconds, the encounters produce dramatically different results in the lives of the people involved.

The obvious point of the movie is to highlight the chaotic nature of life and the unimaginable complexities of all the possible interactions between people and events. That much of the movie, at least, I can agree with. Unfortunately, the larger framework of the picture ends up being profoundly nihilistic in that the ultimate message is that all of life is left up to random chance. While the main characters (Lola and Manni) end up having what might be called a happy ending, the underlying message is despair masquerading as irony, because they just happened to be lucky – this time.

However, there is an answer that explains the complexity of the world, and which gives meaning to Janet’s life – and your life too. This answer has such power because it starts with the Creator God’s bold declaration at the birth of the universe that all of creation has value and meaning. We can know this because in Genesis 1, at the end of each creative step, the Creator God proclaims that each part of creation “is good” – an idea that the psalmist echoes over and over again in his glorification of God’s handiwork. The one exception, of course, is the creation of human beings, which He describes as, “very good.”

With that truth as the context for life, meaning and value are always available, because it recasts the hurt, pain, and brokenness of life in terms of renewing and restoring the goodness that was in the world originally, but was lost and is now being recovered through the faithful actions of believers. In this context, my wife – indeed all human life – is of infinite value regardless of age or circumstances because God has declared it to be so. Likewise, our service to others becomes a monument to truth and fidelity in a world that is sorely lacking in both.

A prayer for when you are wondering why…

“Blessed are You, Lord God, King of the Universe. It is right that I should at all times and in all circumstances bless You for who You are. But today I want to bless You especially for how Your nature defines reality for us. Thank You also for not being silent, but speaking out to the world. Thank you for a reality that is plain and open, and not hidden behind esoteric masks. Amen.”