As I write this it is 8 pm Friday night, January 8th. For the past three or four days Janet has been fighting a battle with almost nonstop diarrhea. She hasn’t eaten anything in several days, but still the flow continues. In addition, this morning she was experiencing a raging thirst but had lost the ability to suck on a straw.

After a few minutes’ search I found the Provale cup that I bought a year ago but which, at the time, Janet refused to use. The cup is designed such that each time it is tipped, it only dispenses a precisely metered amount of fluid – either 5- or 10-cc. This helped with her thirst, but was a short-term solution at best.

A bit later, the hospice nurse called on the phone and after I described what was happening, she said that we may need to get Janet into their inpatient facility. Twenty minutes later, the nurse was in our living room and, after examining Janet, she called the doctor and got orders to transport her to their facility. The ambulance arrived a bit after 3 pm and Janet was on her way in about 20 minutes.

Between the time that the orders went in and the ambulance arrived, we got a phone call from Janet’s brother in Massachusetts. He hasn’t spoken to her in a couple years, and in her current extremely confused mental state, I didn’t know whether she would understand what he said to her or not – or whether she would even recognize his voice. But I held the phone up to her ear and told Dan to go ahead and speak.

There were a few comments like “You need to rest and get well.” Then he got to the main point of the call and said, “I love you, Janet.” And Janet replied, very softly, “Love you.” I think he may have finally understood that he might not get another chance to speak to his only sister – on earth at least.

About a quarter to 5 pm, I got a call from the intake nurse at Houston Hospice and she told me that Janet had arrived safely and was at last resting comfortably. They examined her and found additional blockage, which they cleared out, and then they put a catheter back in place and started an IV with a morphine drip to make her more comfortable. 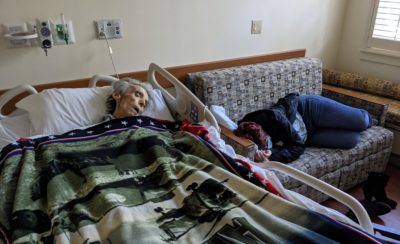 Frannie and I were able to visit her Saturday. Here is her room. Frannie is taking a nap next to Janet. Janet is covered by her two favorite fleece blankets.

Many questions that newly diagnosed patients have on many support forums can be boiled down to one common concern. While the specifics obviously vary from one condition to the next, the basic question is the same: “How much time do I have?”

While that is a very understandable concern for everyone involved, it can be a bit problematic. In the first place, unless your doctor is a psychic or a prophet, there is no way of knowing how much time you have left. Consequently, you are left with statistical answers and educated guesses. As an example of how troublesome statistics can be, consider the situation with Huntington’s Disease.

An often-cited statistic is that average survival is 20 years after diagnosis. However, that number was derived in the past when it was mainly the physical symptoms that were driving people to the doctor to get a diagnosis. But that situation has changed. Today, more people are going to the doctor with the onset of the emotional and cognitive symptoms, which some studies say may precede the physical symptoms by as much as 20 or 30 years. Then, add on top of all of that the fact that people often have nervous tics or mannerisms that have nothing to do with HD or any other pathology, and you can see that attempting to apply an average to one specific life can become very dicey indeed.

So what are we to do? My recommendation is to stop trying to see into the future. The really important statistic is this one: Life has a 100% fatality rate. Moreover, whatever disease you have may not kill you. People with all kinds of serious neurological diseases die from injuries in car wrecks, heart attacks, cancer, or you name it. The only guarantee my Janet has is that she won’t die of old age. Everything else is still on the table.

The only reasonable course of action is to recognize the concepts of Tempus Fugit and Carpe Diem, specified in the post title:

Tempus Fugit – Time flies. As Chaucer observed in 1395 in his work The Canterbury Tales, “Time and tide wait for no man.” The point here is that there are no timeouts in life. You may at times feel like you are on the sidelines watching the game, or marking time and going nowhere (I know I often have), but that feeling is an illusion. The truth is that even when there is no apparent progress, life is still moving on, and the changes that need to happen are occurring at the pace in which they need to occur. Sadly, many times we only recognize the changes and developments in hindsight.

This idea feeds seamlessly into the second:

Carpe Diem – Seize the day. If every day passes by heedless of whether we are involved or not, the only rational response is to fully engage with each day and wring out of it every drop of living that we can derive. In order to do that, we need to recognize that this living can take two forms: receiving all that each day offers, and giving all that we have to offer it.

But to seize each day in this manner, our eyes need to be open and our senses tuned to that which is outside ourselves. In the military, this tuning of the senses is called “situational awareness,” and all it means is to be conscious of what is going on around us. That is often much easier said than done. At times like these when we are surrounded by so much ugliness and anger, it can be comforting – and oh so much easier – to simply tune out the world and curl up in a nice quiet bunker somewhere until things get better.

However, if you do, just be aware that nothing will ever get better. Life only improves when people like you and I are involved in the world around us and doing what we were put here to do, even if our own individual acts don’t seem very big or significant.

The other day while standing in line at Walmart, I noticed that a woman in one of their motorized carts had two large cases of water in her basket and no way to get them onto the conveyor belt to be rung up. So I walked up and offered to help her get them onto the counter. Then later, I noticed the same lady’s car was parked directly across the parking lane from my car, so I went over and again lifted her water into the trunk of her vehicle. Now will world peace be brought about because I helped her? No. Will I get extra brownie points in heaven for doing a good deed? I sincerely doubt it.

So what was the importance in what I did? Simply this: I saw her. I allowed myself to become aware of a fellow human being and their need without imposing on them what I thought they needed. And if more people did that, perhaps we would get a bit more peace in the world.

Remember that each fleeting day is a gift from our Creator and in response to His gift, seize it in both hands and with your eyes wide open. Right now is all we really have.

A prayer for when you are worried about tomorrow…

“Blessed are You, Lord God, King of the Universe. It is right that I should at all times and in all circumstances bless You for being Lord of all that is, all that ever was, all that ever will be, and all that ever could be. But today I want to bless You especially for being the Lord of the small subset of the cosmos in which I live. Thank You for caring about me, individually. Thank You for giving me senses with which I can perceive those around me, and hands with which I can help to meet their needs, no matter how small. Thank You for this day of my life, please help me to live it to the fullest. Amen.”