Well, Janet made it through New Year’s, though she probably has no idea that it occurred. Per tradition, we are keeping her little Christmas tree lit until Epiphany (Jan 6th) which commemorates the arrival of the Magi in Bethlehem.

In a little over a week I will start my new job, so, to provide better care, I have changed the hospice organization we were with to a larger one, which has more resources and so will be able to provide better services during the transition time. Of course, a lot of the details are dependent upon the transition that Janet ends up making. She could, after all, transition directly to Heaven before the job even starts.

Lately, I have found my prayers for Janet have changed. More and more I find myself praying for her peace as she moves from this world to the next. I am praying for no upset, no anger, no drama, and no pain. I read a story this week written by Douglas Gresham, the older son of Joy Davidman and the stepson of C.S. Lewis. At one point, when he was nine, he prayed for her cancer to go away. Shortly thereafter, it indeed did go into remission. But then five years later, it came back and he related how he again prayed:

“I was fourteen by this stage—not a little boy anymore. He (God) said: If you need me to do this, I can fix it again. And I thought to myself: Asking for the same miracle twice would probably be a greedy thing to do, and my mother had gone through enough agony the first time. So I said: Thy will be done. I walked out, and she died two days later.”

Well, I’m not 14, but I know the feeling. There comes a time when you suddenly realize that your desire for their survival is not about them at all, but is in actuality a rather low form of selfishness. It can be hard to accept that the best thing for your loved one is to go on to what is next for them because if you profoundly love someone you want to be with them. Very natural, but nevertheless a major gut check.

Unfortunately, another component leading to the trauma in the survivor can be the expectations of others. I have seen people (and I’m sure you have too) that use the ways and degrees that you mourn to measure how much you really cared for the person. In other words, if your behavior doesn’t agree with their image of what mourning is supposed to look like, you must not have really cared. Of course this reaction isn’t new. We even see it documented in scripture when David doesn’t mourn “properly” for his son by Bathsheba.

I guess this discussion is just a long-form way of saying that when Janet’s ultimate transition takes place, I don’t know what my mourning will look like. I may collapse in tears on the floor – or I may not. But regardless, know that my love for Janet is real and that, as always, I desire that she be happy and healthy. And also know that, like all caregivers of those with neuro-degenerative conditions, the mourning started a long time ago.

So January has finally come as it usually does, festooned with streamers, confetti, and champagne bottles – not to mention the requisite sorrows about the past and hopes for the future. Moreover, this sort of thing appears to be inherent in our makeup as humans, for end of year observances have been going on for thousands of years with surprising consistency. For example, despite how it may appear, the concept of a New Year’s Resolution is not a marketing scheme thought up by the operators of gyms and spas. In fact, the idea goes back to at least 2000 BC with the ancient Babylonians. Some may find it comforting that, according to archaeologists, the ancients were no better at keeping their resolutions than we are.

Another aspect of the New Year is visible in the month’s name: January. Though there is a bit of controversy, it was probably named for the Roman god Janus who had two faces: One facing forwards, and one backwards. A rarity in the Roman pantheon, Janus was not inherited in any form from the Greeks, but was instead a purely Roman invention. Janus started as the god of doorways, but this duty quickly expanded to covering any sort of transition. A sense of that meaning is even retained today as we use the New Year as an excuse to indulge in endless retrospectives of the past and prognostication over what the future may hold. 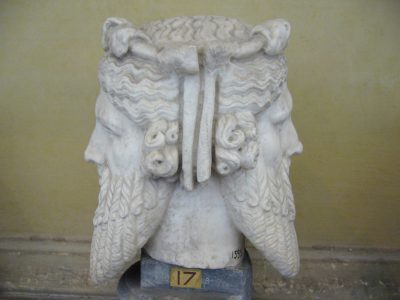 As a caregiver, however, I find it difficult to get too excited because in so many ways, New Year’s is just another day. There is food to prepare and diapers to change – and of course, naps to be taken when (if) the opportunity arises.

The other point is to recognize the date’s apparent arbitrariness. Why does January 1st have such an important place in the culture? The historical answer to that question lies with a couple of Popes and a Roman emperor or two. But after the history lesson, the answer to our question becomes real clear: There is no reason for the first day of January to be any more important than any other day. It is a time landmark because we say it is.

Of course, the converse is also true. There is no reason for the first day of January to be any less important than any other day. Hence it is not a day to be wasted or passed over mindlessly. To do so runs the risk of missing, as the title says, “First Times” and “Last times” because they can both arise without warning. For instance, the first time she shows a particular symptom, or the last time we kiss. Consequently, I also spend time praying for vigilance to not miss any of these precious moments. Like every day, it is to be lived to the fullest in service to those around us.

Finally, we need to recognize that nothing is, in the end, truly arbitrary. Just because we can’t divine a reason, that doesn’t mean a reason doesn’t exist. The point is that God has a habit of taking things that have no intrinsic meaning and giving them meaning – this is how stones become monuments, tents become tabernacles and a simple meal eaten in haste becomes a sign to the world of God’s faithfulness. So, remember the fundamental question behind that meal, “Why is this night different from all other nights?” and remember also the answer: “Because on this night God acts.”

A prayer for when you are on the cusp of change…

“Blessed are You, Lord God, King of the Universe. It is right that I should at all times and in all circumstances bless You for being the same yesterday, today, and forever. But today I want to bless You especially for being there for me when I am in the midst of change that I don’t understand and traveling on a road that I can see only dimly. Thank you for guiding and directing my steps. Please show me how to be a light for the steps of others. Amen.”