This is the section where I would normally give an update on my Janet’s health condition, but that is clearly no longer of any significance, given her change of residence to heaven.

So now come the adaptations and the wondering about how to be a widower. And the first step in that process is figuring out how to tell someone what happened without breaking down in tears. I got a lot of opportunity to practice this week because I started a new job on Wednesday and, because the job is in a different part of the state, I was looking for a house or apartment for Frannie and I to rent. The conversation would go something like this:

“So, Mr. Porter, how many adults will be living here?”

“Just two, my daughter and I.”

Nothing judgmental there, all she said was, “Oh?” So why do I feel like I’m being interrogated?

“Yes, my wife just passed away Sunday from a degenerative neurological condition called Huntington’s Disease. It has been described as having Alzheimer’s, Parkinson’s and ALS simultaneously…”

At this point, I would typically just say “Thank you,” and try to move on with the conversation. Occasionally, they would say something about how “brave” I was. I know that such comments are intended as compliments or reassurance. But, in this context at least, being “brave” simply means continuing to move forward and refusing to die too. Most people have no idea how many ways a person can be dead and still continue to breathe.

I know what you’re thinking: “Didn’t he say last week that he wasn’t going to be posting for a while?” And you are right. The only problem was that when it got right down to it, I couldn’t keep myself from writing. The title is really what I have been going through this week: “Now what?” Of course that simple question could be answered in a number of ways:

But as I contemplated it, I had a thought that this question, as simple and as common as it is, may actually be part of the problem – or at least, part of my problem.

When Janet was still ill, I used to ask myself this question quite often because I was trying to understand where things were going. What was the next symptom? What was the next challenge to be faced and overcome? I wanted to know what the future held. And now I am feeling the same desire – though for a slightly different reason. So what, in the final analysis, has Janet’s transition to the next life fundamentally changed? As it turns out, not a whole lot.

You see, we all like to tell ourselves that once our loved one has gone on or the present predicament has passed, life will calm down and be more predictable. Sounds good in theory, but the truth is that life remains stubbornly UNpredictable. The exact nature of the unpredictability may change, but at the end of the day, I’m still left trying to figure out what is coming down the road so I know what to do about it. I still think that I can prevent more “bad stuff” from happening – all the while ignoring the fact that there isn’t anything I can do. Not really.

Oh, I can take action based on projections and predictions of likely future events, but those are really just guesses – and sometimes not even very well-educated ones. So what should I do? Well, stopping isn’t really an option. Likewise, hiding and licking my wounds sounds oh so comforting, but is likewise out. All that is left, really, is for me to do the same as I have always done: take it one day at a time, doing what God has put before me for that day. Or at least, that’s the same as I have always done on my better days…

In any case, this week I started my new job and I think I am going to enjoy it, as there is a lot of work to do and solid support in the company to get it done. Can’t ask for much more than that! I also found a house for us to move to in Mineral Wells, Texas. It will be a long drive to work, but as compensation, it will be a long drive through some of the prettiest country on earth: the Texas Hill Country!

To give you a sense of my new work, this is a picture of the morning rush hour in beautiful downtown Cisco, Texas. 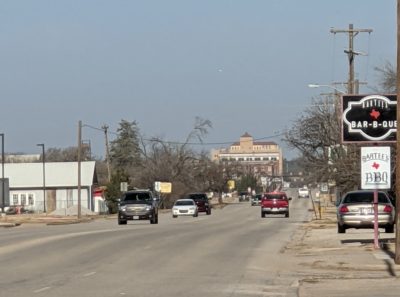 This is going to be great!

A prayer for when you feel directionless…

“Blessed are You, Lord God, King of the Universe. It is right that I should at all times and in all circumstances bless You for being there to guide and direct the steps of Your people, and through them, the world. But today I want to bless You especially for the grace that keeps my feet moving and guides their path. You know that sometimes I feel like stopping and hiding. Thank You for the faith to keep walking. Amen.”