So Janet now has two security cameras watching her, and between the two of them I can track where she is most of the time. I may need to get another for the kitchen, but we’ll see. The nice thing about the ones I purchased (which are made by Samsung) is that the setup was super simple, and it feels so nice to be able to check up on her anytime. Unfortunately, Janet doesn’t always feel the same.

Janet keeps wanting to stand up and walk around the apartment without her walker. One afternoon Frannie and I had to run a couple of errands, so Janet took our being out of the house as an opportunity to get up and have a bit of a walkabout without being scolded – or so she thought. As soon as she got up, the motion detector on the video feed tripped and I got a notification on my phone.

I opened the app and sure enough, there she was, walking around and no walker. The cameras also have built-in mics and speakers, that allow two-way communications. So I tapped the microphone button on my phone and said, “Janet, you aren’t supposed to be walking around. Go sit back down!” A couple seconds later I could hear my words coming out of the camera’s speaker. She looked startled, but she did it. This scenario played out twice more, but the second time when I tried to call up the camera, it was off-line – she had unplugged it.

When we got home, I reminded her that those cameras are helping to keep her out of a nursing home and that they need to stay on. She agreed, and promised not to disconnect it again, but just to be sure, I found a place to plug in the camera that she can’t reach…

Jan has also been having a lot of trouble grasping (a) how the medical alert system we just got works, and (b) the importance of wearing either the bracelet or the pendant at all times. For that piece of technology, I’m trying to keep it as simple as possible: “If you need help, just push the button.”

The service we have uses a box that is essentially a speaker phone on steroids. When Janet pushes the button, the box calls the service and an operator asks her if she needs help over the (very loud) speaker phone. If either Janet tells them she needs help, or the operator doesn’t hear any answer, they will start working their way down the contact list, calling first me, then Frannie, and finally 911.

A nice feature is that the service provides us with a lockbox for the front door (like realtors use) that contains a key to the door. This box allows the EMTs to come right in without needing to wait for the police to arrive and break the door in.

Now all I have to do is convince her to use the button. Today she fell and cracked her head. No major damage, but it bled like crazy for a couple minutes. After I got things under control, I asked her what she would have done if I hadn’t been right there when she had fallen. She said, “Surrendered to God…”

As I look back, the responses to my blog posts have run the gamut from extremely complimentary to borderline repulsive. However I can say, without hesitation, that the most common type of response could be summed up in the statement, “What… You too?” Despite the many modes and opportunities for communication we have at our disposal, we still can feel surprised when we encounter someone with whom we share experiences and feelings.

Sometimes this surprise results from unchallenged stereotypes. As a rather benign example, I can’t tell you how many times people have been taken aback by the fact that I enjoy knitting. But the fact of the matter is that in many cultures, it was historically common for men to knit because it uses many of the same skills that were needed to create and mend fishing nets. Besides, I find it utilitarian, relaxing, and even meditative.

Sometimes we are surprised by a shared appreciation of something. For instance: “Wow! You like lutefisk, me too!” Actually, that’s a bad example. Nobody likes lutefisk. You just eat it because you are Norwegian or Swedish – or a polite out-of-town visitor at a Lutheran potluck dinner.

But more ominously, the surprise sometimes derives from a feeling of isolation that leads us to believe that we are the only person in the entire history of humankind to have ever felt so sad, or so troubled, or so hopeless. Of course when you say it that way, it can sound a bit silly, but it’s not. When we are feeling isolated and alone, we have no point of reference to tell us that our current feelings are to be expected, and so are, in fact, rather common.

But that begs the question first posed above: How, in the face of all the communications options we have today, does someone end up feeling so isolated? Well, it’s not about technology, that’s for sure.

Long before the advent of Facebook, the World Wide Web, the internet, television, telephone or even the telegraph, personal isolation was a problem. The image of the loner isolated in the midst of a vast sea of humanity was a well-known theme the world over, and had been for a very long time. And to be fair, the world has, over the centuries, benefited greatly from such people. Whether you’re talking about authors, philosophers, painters, musicians, or anchorites, some of the greatest minds in history were loners.

But that image isn’t really the one I’m talking about. For those people, the solitary lifestyle they choose (or in some cases, perhaps, chooses them) was not about isolation. Rather, withdrawing from society was, for them, a tool that allowed them to be united with something larger than themselves: their art, their muse, or their God. 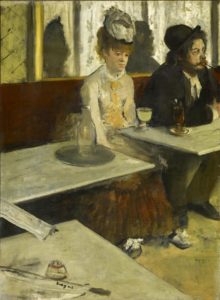 This painting by Edgar Degas and is titled L’absinthe or The Absinthe Drinker. Degas created the painting between 1875 and 1876, and it shows the interior of a cafe that still exists in Paris, La Nouvelle Athènes. Located a stone’s throw from a busy boulevard and, at the time, a gathering place for artists and young philosophers, the cafe and the street outside it were, no doubt, filled with happy, bustling throngs. This was, after all, Paris: the so-called “City of Lights.”

Yet all we see in the picture is darkness and isolation. The woman, apparently unaffected by the lights and crowds, is isolated from everyone – even from a male companion to her left. So she simply stares down into her drink or perhaps into the abyss.

Now, a hard question: Did any of you have a flash of recognition, like I did, looking into the woman’s face? A moment of, “What… You too?” If so, take a moment and then we’ll continue.

It would be hard to overstate the upset and anger that this painting caused when it was first shown publicly. It was called vile, disgusting, even obscene – and that was from Degas’ fans. One art critic was so repulsed and outspoken, that he later had to publicly apologize for a verbal outburst in which he referred to the woman as, “a whore.”

The point is that back then, as now, people didn’t like to look too deeply into the pain that lies in the hearts of others. Of course, we don’t know what brought the woman to this state, but does it really matter? Despair and isolation, regardless of the cause, are the same across cultures, and as we can see, across the centuries, as well.

Consequently, readers of the two or three dozen support forums I follow probably have little trouble recognizing both the feeling expressed in that face or identifying its many causes. For example:

There is no end to the reasons…

So given all this familiarity, what is the solution? Before we can answer that question, we need to come to an understanding of the word, “solution.” There are pharmaceutical solutions, psychiatric solutions, religious solutions, and spiritual/esoteric solutions. Likewise, some solutions address root causes, while others simply help you survive until a long-term solution becomes apparent. In the right context, they can all be helpful.

But one that I particularly want to recommend could be called, “Ink Therapy.” Given recent history here in the US, I guess I should make it clear that I’m not telling you to ingest it, snort it, or take it intravenously. Rather, you want to use the ink for writing. Think about it, if the fundamental cause of “that face” is a feeling of isolation, the most direct attack on the problem is to refuse to be isolated. A couple weeks ago, I told you about my Uncle John who had the habit of just walking up to people on the street and introducing himself. In the context of the support groups that you follow, I’m suggesting that you do the same thing.

If all you’ve ever done is lurk in the shadows around the edges of our virtual campfire, go to your forums, click on the field that asks, “What’s on your mind?” and introduce yourself. Tell us who you are and what is going on in your life. Tell us your story – the end of which, by the way, you can’t yet see.

While it might seem obvious that your story is important to you, it’s probably not so obvious that it can be just as important to someone else. I have learned that there is one type of question on the forums that is almost always answered in the affirmative. I’m talking about the ones that start with the phrase, “Is it normal for…” The truth is, it doesn’t matter what symptom you describe to finish that sentence: 99.99% of the time, someone else will have experienced the same thing. So, yeah, it’s normal.

Talking, writing, communicating multiply your opportunities for “What… You too?” moments. And while those moments may not make your burden any lighter, they will nevertheless make them easier to carry because you know you aren’t really alone. Indeed, many other people have trodden the same path you are on now – and have come out the other side.

First, don’t worry about whether your story is great literature – it doesn’t have to be. It just has to be real and authentic for where you are right now. Also don’t worry if your message evolves over time. One of the epiphanies I have had in going back and turning these posts into a book is that I am not the same panicked man I was last October – not to say that I don’t sometimes still panic. But I have grown, because any kind of writing (even just a short note) can be a journey of self discovery.

Second, don’t start your posts with, “Sorry, that this is a long post, but…” Nobody is handing out extra “brownie” points for being pithy. You matter. Your story matters. Just tell it.

A prayer for when you are despairing…

“Blessed are You, Lord God, King of the Universe. It is right that I should at all times and in all circumstances bless You for Your involvement in our lives. But today I want to bless You especially for Your intimacy with, and closeness to my heart. There are many times that I feel so broken and alone that I just want to sit and stop feeling anything. Thank you for being with me in those dark times. Thank you for surrounding me with Your children to reassure me. Take me by the hand and lead me back to hope. Give me the courage to keep reaching out. Amen.”