One of the nice things about home hospice is that they offer an option for respite care – which is to say, a chance for the caregiver to get a little downtime to recharge a bit. The way it works varies from one agency to the next, but basically it involves them picking up your loved one in an ambulance and taking them to an inpatient facility for a short period of time of, say, five days.

We had tried once before for respite care, but there were no beds available in the area due to the panic over the virus. This time it worked out. They picked up Janet at 7:30 Wednesday morning and will have her home Sunday afternoon. My biggest two concerns were that A) Janet wouldn’t understand what was happening and B) She could pass while in their care – followed, naturally, by an entire alphabet of other concerns.

In order to address Concern A, we began talking to her about it as soon as I got word that all the arrangements were in place. She was confused at first because she thought they were coming to pick her up to take her to heaven (see last week’s post), but eventually she understood that she would be back home on Sunday.

Concern B has been a harder nut to crack because the truth of the matter is that she could die in the following five days – this is, after all, a hospice program and not an adult summer camp. The way we addressed it was to say our “final” goodbyes when she left the house, and we made sure that we showered her with hugs and kisses – even as they were loading her into the ambulance. But that got me thinking, isn’t that how we should be acting all the time?

Why should we wait for a loved one to be in hospice to make sure that they understand how much they are loved? We, of course, shouldn’t. But we all, of course, from time to time, do.

And what about the rest of the alphabet of concerns? All you can do is acknowledge that despite what culture tells us, we are not in absolute control of our destiny. But the bottom line for us is that these concerns have been our reality this week. 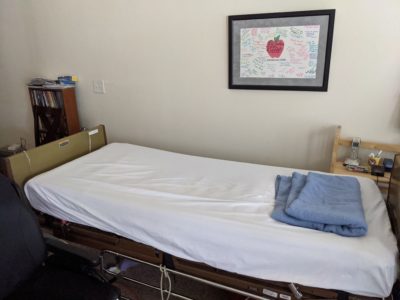 This week has been a chance to begin to experience life as it will be when Janet doesn’t need all of my attention and care. Like I say in the title of this post : This is a test… This is only a test…

Anyone who has ever bundled up a child for their first day of school, summer camp, college, or basic training has had to face the specter of separation anxiety – which is really just a broad-brush label for responses to situations in which relationships are changing. Unfortunately, changing relationships is the hallmark of being a caregiver for someone with a chronic or terminal disease. To make matters worse, the speed and severity of these changes are beyond our control – even as we try gamely to control them.

However, if you look up the topic of separation anxiety online it is often characterized as a “disorder,” and worse, a disorder that primarily affects children and infants. In other words, if as an adult you are feeling this sort of anxiety, the implication is there that something is wrong with you – and perhaps even that you should just “grow up.”

To be fair, the problem isn’t with psychological professionals, counselors, and therapists as they can, and typically do, understand the nuances of our situation. The real issue is all the folk-psychiatrists that caregivers can encounter on a daily basis – which is to say, family members, friends, co-workers, and acquaintances.

But even if we accept the proposition that these people are doing the best they can, we have to recognize that telling someone who is suffering from guilt-driven separation anxiety to “take it easy” or “give yourself a break” does about as much good as telling someone with depression to “cheer up” – which is to say, none at all. So here are a few things that caregivers need to consider as they fight their way through this situation:

There are no quick fixes: Recovery from this sort of anxiety can be a long hard road because turning around and changing direction can feel an awful lot like giving up – even when we see that the way we are doing things now is not working. Sudden shifts can and do happen, but they are not the norm.

Change is inevitable: It might be nice to fantasize about a universe where everything is static and constant, it is in the end just that: a fantasy. The world changes, people change, relationships change, everything changes. Being in a state of flux is the normal condition of everyone and everything in the, at times maddening, headlong rush from “what was” towards “what will be.”

No one has infinite mental and emotional resources: Simply put, we all get tired and need to rest. Getting the rest that we need in order to function is not weakness, giving up, or copping out. Even Jesus took time to rest.

No one is infinitely wise: We all make mistakes all the time. That is a fact. But it’s also a fact that people usually make more mistakes by failing to act than they do by acting. So do your “due diligence,” decide on a course of action, and then act. A plan doesn’t have to be perfect when you start. Remember that you can’t steer a parked car. Movement, action is called for.

Professional caregivers can care as much as you do: One of the challenges that I ran into when considering putting Janet into inpatient hospice for five days, was the worry that the people there wouldn’t know how to take care of her. They don’t know how she reacts or feels and they don’t know what she likes. While that much is true, it’s also true that the vast majority of doctors, nurses, and CNAs are caring, tender people who will treat Janet like she is a member of their family.

Caregiving is a team sport: In a lot of ways, this point goes along with the last one. As a caregiver I am one (vital!) part of a care team. The other team members may not see my loved one every day, or ever, for that matter, but that doesn’t mean that everything is dependent solely upon me. That is why there is a team – so one person doesn’t have to do everything. In engineering terms, having a team means you as the primary caregiver are not a “single point of failure”.

You are never alone: While this point might sound a lot like the previous one, there is a difference. In addition to being part of a team that together takes care of Janet, I also have backup and support for my particular job on the team. This point is critical because the basis of my relationship with Janet is unique among the team members. Our relationship is based on a covenant between God, Janet, and myself, which means that my not being alone means far more than somebody being there to lend me a hand. It means that regardless of how bad things might seem at the moment, there is a hand on the wheel that is steadier than mine and an eye on the road ahead that is far clearer.

A prayer for when you are tired…

“Blessed are You, Lord God, King of the Universe. It is right that I should at all times and in all circumstances bless You for the limitless strength to be found in You. But today I want to bless You especially for providing caring and skilled healthcare workers to care for my loved one while I rest, recuperate, and heal for this last leg of our journey together. Strengthen and guide me so that I might remain faithful to the end. Amen.”