This week we’ll continue the process of revisiting some of my posts written over the past year and a half, and giving them a bit of a face-lift.

As in the past, the procedure has been for Jean to go through the past posts and identify one that she felt was an “evergreen” topic. This one is the sequel to the one that we presented last week. It originally ran February 16th of 2020.

One big change worth noting is that, in addition to assisting me in identifying posts, my soon-to-be wife Jean has also taken over the editing duties from my sister in Indiana. More on the “soon-to-be wife” comment later.

﻿In the past, we have considered loneliness from the standpoint of things a caregiver can typically lose due to the progression of a neurological condition. The things we discussed ranged from the patient’s inability to simply express love by saying “I love you,” to their inability to even behave like a rational human being.

With that in mind, there is one remaining piece of business that needs to be handled. You see, in the past as I considered my situation, I saw that I was surrounded by people who loved me in a multitude of ways. Moreover, many were even willing to demonstrate it in the form of hugs, gentle touches and reassuring words. I received this kind of support from family, friends from church – even people I knew from online forums and local support group meetings. While loneliness does often result from not being told that you are loved, that didn’t seem to be at the root of my loneliness. So I continued looking…

My next clue came when I saw a post online from a woman who described in heartbreaking detail the feeling of being invisible – of people not really seeing her. Professional caregivers would come into her home to take care of her husband, and as they went about their duties she would feel pushed to one side – not really a part of what was going on.

The HD clinic that we went to was always great, but there were other circumstances that were not so positive. I can remember, for instance, going to an Urgent Care clinic and being treated like little more than the bus driver that got her there. If you think about it, it actually made perfect sense. After all, Janet was the patient, not me. Still, I had gotten used to being part of her care team, and then suddenly in those situations, I was not.

So with that one insight, I began exploring the idea a bit, and the more I thought about it the more real it felt. Moreover, connecting the dots between invisibility and loneliness turned out to be really easy. If you are invisible, you are unseen. If you are not seen, there is no way that you can be known, and it is the recognition of this isolation that produces a profound sense of being alone. 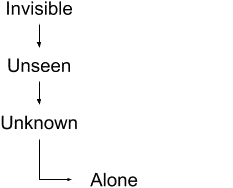 But this progression also points to the solution. If the sense of aloneness is brought on by not being known, the obvious solution is to become known. Consequently, being known results in you being recognized, and this recognition enables you to become fully present – which in this sense is clearly the opposite of invisible.

I say “unfortunately” because that word today carries with it quite a bit of cultural baggage. Our society has turned intimacy into a virtual synonym for sex. Ironically, this redefinition is occurring at the same time that common terms like “friends with benefits” are turning sex into a purely physical act that is totally devoid of anything even remotely resembling actual intimacy! If you have never heard the term, feel free to look it up online, but be forewarned: it may turn your stomach.

“But,” you might ask, “what real difference does it make?”

Simply this: If intimacy is redefined as simply a contextless, amoral physical act, we have essentially undercut the emotional and moral underpinnings that hold our society together by making emotional isolation and hopelessness the norm.

Or consider another potential impact. I have complained in the past about the lopsided distribution of men and women on the forums. The question is, where are the other men, and where are they going to get the support they need? Well according to one social worker I spoke with about the matter, they aren’t going anywhere. They are just going without the love, care and support they need. Maybe the effect that I am talking about here is playing a role. Regardless, I think that it is high time we reclaim the true meaning of intimacy as profound emotional and spiritual connectedness, and reject the hyper-sexualized context into which it has fallen.

If you look up intimacy in a dictionary, you will see that the first synonym is often closeness. For me at least, this first-order approximation is lacking because I don’t want to just be close to someone. I want them to know me and to understand me. More than that, I want to be able to know them and understand them because, you see, real intimacy is always a two-way street.

The next thing to notice about intimacy, and perhaps this is why true intimacy is so rare in our culture, is that it takes time to develop. Intimacy doesn’t come together over an occasional cup of coffee at work, talking about baseball scores. It grows slowly as people become deeply known to each other by discussing topics that expose who we are and what we stand for. Moreover, intimate conversation can be difficult because we soon discover that other things are needed for true intimacy to grow and flourish.

For example, people are not all the same, so we need to be able to appreciate the differences between us and accept each other for who we are – not who we might turn into someday. Likewise, I have to be willing to set aside making judgments about the things that I don’t like.

In addition, there are risks associated with losing your “invisibility cloak.” True intimacy is risky, and the biggest problem with people knowing who I am is that, well, people know who I am, and people are notoriously unreliable. Unfortunately, there is a small percentage of folks that actually enjoy making other people feel bad, and someone who is emotionally open forever carries a target on their back. If I am to be truly intimate with another, I need to be open to exposing to them who I really am at my core. Or said another way, I need to let you see my hopes and dreams, while simultaneously laying bare my fears and pain – as well as the scars that life has given me. I must bring forth into the light all the dark, injured, or damaged parts of my soul so they might be healed. True intimacy requires honesty at an unprecedented, and oftentimes painfully uncomfortable, level.

The bottom line is that true intimacy is an extraordinary act of faith, and it is not a process to be taken on lightly or cavalierly. Please don’t take that statement as being in any way judgmental. You have your own decisions to make on this matter, but I have already made mine. For myself, I am deciding for intimacy, openness, and transparency. I have spent too much of my life in an emotional bunker where only a very select few were allowed in.

In the not-too-distant past, I was reaping the result of those poor decisions. I was 66 years old and while I had friends, most of the people that I was ever really close to were either dead or soon would be. This distortion resulted in me having a hard time hearing compliments because I always said to myself, “Oh yeah, you say that now. But you wouldn’t if you really knew me.”

However, you’ll notice that I am speaking of those issues in the past tense. So what made the difference? In a word: “Faith.” The faith to keep my word and remain faithful to the vows that I made to Janet. The faith to not give up and die when she did. The faith to reach out and support someone I barely knew when she needed comfort over the death of her daughter. The faith to pick up the phone and invite the lady to lunch at a Cracker Barrel restaurant after church a few Sundays later.

To be very clear, the relationship that now exists between Jean and myself is not a reward for having done what was right. Rather it was a gift that I was only able to have because all the preceding faithful acts had changed me, turning me into someone who could see the gift and receive it. If I had not been faithful, Jean would have still been the beautiful woman that she is, so the gift would still have been there. But I would have not been able to see it, or perhaps seeing it, I would have been unable to grasp it and pick it up.

Another important point about intimacy concerns the relationship between intimacy and love: the one leads to the other. I dare you to learn to deeply know and understand someone and not start loving them on some level. (It is, after all, possible to love someone that you are not married to…) I think this relationship is why when comparing Faith, Hope, and Love, Paul says that the greatest of them is Love. As Paul pointed out, when you have received everything that God has in store for you, neither faith nor hope will any longer be needed. However, love comes from knowing, so it will continue to exist and will even thrive as real intimacy grows over eternity.

Finally, we need to remember that regardless of what your decision might be about openness and transparency, there is one point about intimacy that is unavoidable. The simple truth is that no one is ever truly alone. As the Psalmist so eloquently pointed out, there is no place where we can go that God is not already there. Likewise, there is nothing that we can do to hide who we are from God. Consequently, when God says that He loves you, you shouldn’t doubt that love. The truth is that God doesn’t love us in spite of knowing us, rather God loves us because He knows us.

A prayer for when you are feeling invisible…

“Blessed are You, Lord God, King of the Universe. It is right that I should at all times and in all circumstances bless You for the intimacy of Your presence in my life. But today I want to bless You especially for the ways in which Your intimacy can draw us together. Thank You Lord, for my family and friends, and all those to whom I am drawn close in Your love. Please show me how to reach out to those who do not feel Your presence and give me the grace to help draw them into Your healing light. Amen.”